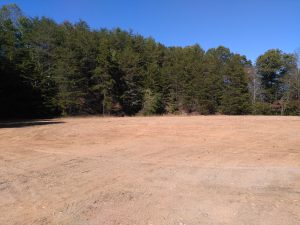 After more than a year of discussion, at the October Council meeting, the vote passed to tear down the courts. The tennis courts at McGalliard Falls have now been demolished (pic Oct 20) and grass will be planted. The courts could not be repaired  – rebuilding was the only option for courts  – which is very expensive. With courts at the Rec and at DHS, the town did not feel the courts needed to be replaced.

The town did look for other options. In September, 2016 FVR brought Deno Contos from Benchmark Trails to quote putting a pump track in the space. However, the cost of tearing up the courts was too much in addition to the cost of the pump track. (The pump track will hopefully be a feature of the Valdese Lakeside Park.)

Before that, in June 2016, FVR presented theses ideas with detail pros and cons for each…

Patching and painting the surface – other net sports, mini-soccer (futsel), multi-use as is, basketball, four square, shuffle board, putt-putt