The Burke River Trail – a proposed trail following the Catawba River through Drexel, Valdese and beyond – has another segment sponsor. After Rutherford College Mayor Gary McClure and Town Manager Kenneth Geathers met with planners from Western Piedmont Council of Governments (WPCOG) to learn more, they are on board with what the trail will bring to Rutherford College. As previously reported in The News Herald, the Burke River Trail is the vision of Representative Blackwell and the goal is to bring a trail to the communities in eastern Burke County. Western Piedmont Council of Governments is doing a feasibility study to locate possible trail routes.

In June, stakeholders identified a 4-mile segment of the Burke River Trail that will be sponsored by the Town of Valdese. It will follow the greenway from McGalliard Falls Park through Valdese Lakeside Park and then follow a natural surface trail to the north of Draughn High School and a proposed development by Natural Land Alliance. 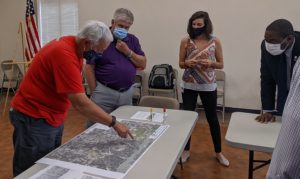 Ways to connect Valdese to Rutherford College were outlined in the 2016 NCDOT Division of Bicycle & Pedestrian Transportation Plan entitled WalkRCV. The possible routes noted in the plan were discussed along with new ideas to keep the trail close to the river. Making sure trail users could access Rutherford College restaurants, shops and the new park that will be located behind Town Hall was also an important part of the discussion.

Representative Blackwell suggested that Rutherford College think of a defining feature to include along their section of trail. Since Valdese will have a suspension bridge along their segment, Rutherford College could consider a gazebo or some public art as an attraction to draw visitors. Representative Blackwell said, “In addition to providing a healthy lifestyle to citizens, the Burke River Trail will have a positive economic impact to the town through tourism, and those wanting to move to an area with trails and outdoor activities.”

Beth Heile, a local trail advocate who has been working with Representative Blackwell to move the trail forward said, “Having grown up in eastern Burke County and attended East Burke High School, I am thrilled to be working on a regional trail that will showcase the what the small communities in eastern Burke County have to offer, while at the same time allowing them to reap all the benefits trails bring.

Mayor Gary McClure and Town Manager Kenneth Geathers will be sharing ideas from the meeting with Rutherford College Town Council and community members over the next few months to get input on finding the best trail corridor through the town.