On Tuesday, December 5, the public was invited to a round table discussion about what features should be included at the park.

First topic was the icon/emblem that would represent the park. Though the rock (long associated with the Waldensians) was brought up, it was decided it may be better in building/kiosk design elements and not the icon. Grapes were mentioned and that would have a good silhouette (when just a marker is shown on a tree).

Then the focus turned to water (it is a lakeside park, after all). But how do you represent water – a wave, a drop? No, a waterwheel! McGalliard Falls Grist Mill is at one end of the greenway. A waterwheel also looks like a bike gear (and maybe a disc, it is round). We liked the idea of the waterwheel (maybe a V – for Valdese – worked into the image, maybe not). 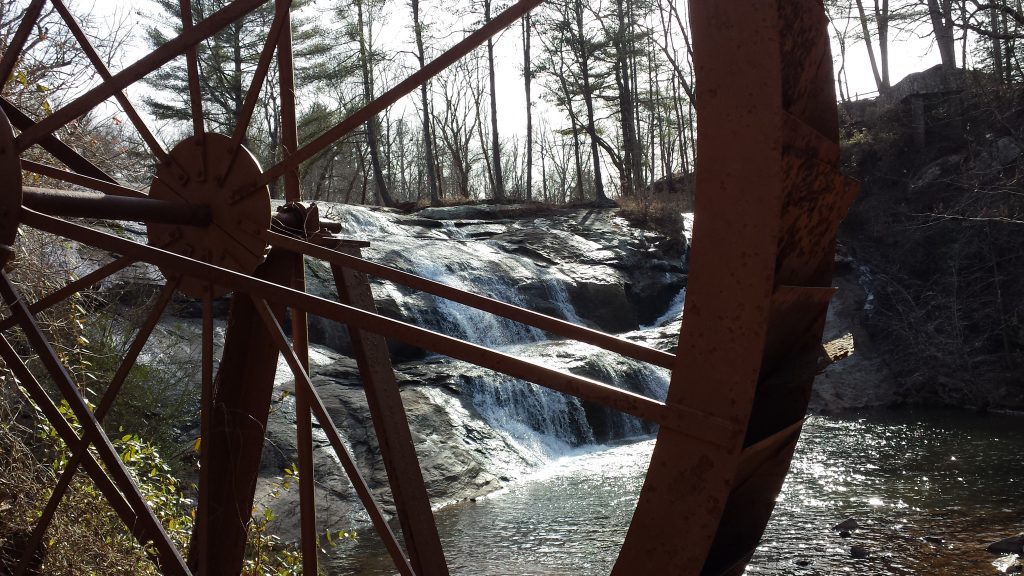 It was discussed that in some documents a playground was mentioned and in some places it was not. Playground (natural style) is desired. Maybe ropes course or beanstalk.

Discussion went back and forth on a natural greenway versus paved greenway (this is the 2 mile trail between the waste water plant and McGalliard Falls). When the money is available, the end agreement was paved to reach a broader audience of park attendees.

There needs to be a picnic shelter large enough to handle groups coming to events (triathlon, trail race, etc). They may not all need to sit at a table, but gather for registration, awards, etc. This group could not give a size – but larger than one side of McGalliard Falls (maybe those 2 side put together), maybe Catawba Meadows size. Not sure. Just big enough for events. This could also be the “classroom.”

The group would like a kiosk at the park after land closing date to tell about the project and that money is needed. This may wait until March when there is a “price list” of features to include.

If building in phases, build the greenway first (this is the 2 mile trail between the waste water plant and McGalliard Falls). But include nice surround (signage, entrance, etc) so people will know is park is going to be a destination park. We want them to have a good impression, even if there is only one feature.

Let’s try to cleanup all that trash from the water side – before closing on land! The water is open to the public even if the town does not own the land.

There was a question of – which feature would bring the most people? Maybe that is the feature to start with. Is there one feature? Is it the greenway?

A viewing platform would be nice.

Possible “no wake” buoys around entrance to cove where kayak put-in will be. Motor boats often come flying in from the main channel into the cove.

Duck hunting in the cove? Can that be closed to hunting?

A small plot (food source planted) for game viewing – deer, turkey, etc with trails around it (not through it).